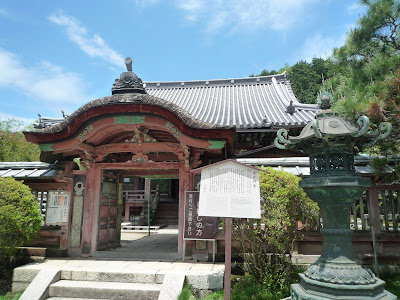 I am not sure how many times I visited this temple. It is located around 500m from my birthplace, and I have been visiting it without any thinking, honestly speaking. Because it was there, I visited. I enjoyed strolling around the ground, watching the weeping cherry tree blooms in spring, the contrast of youthful greenery & the blue sky in summer, the glowing red colored leaves in autumn, and the withering, but clear air in winter. It is always silent, and not be disturbed by too many people. Especially on the 31st of December, I saw the old years out so many times in this temple for 30-years till I married. I was there to ring the bells on New Year’s Eve. Sometimes it was sunny, and sometimes snowing. It is not a huge temple with many prestigious monks, but a lot of local people in this area are walking up the long sharp stairs to the gate to start a new year.

In Fact, in this May, I entered the temple buildings for the first time. I first sat down in the main hall, and admired “Bishamon-Ten”, who is regarded as one of the four heavenly kings in Buddhism, and he is the guardian of the North. (This Bishamondo Temple is located in the North end of the main street, so I personally can believe firmly that he protects us.) He never failed to listen, so was recognized as the god of wisdom. Also, he is one of the Seven Deities of Good Fortune. He had such a smart god and had strong power to protect the people. Due to his invincibility, Bishamon-Ten is known for the god of victory. (Although not by choice, I have been protected by him.) In the next building, there are sliding doors with interesting paintings with techniques, so it is nice to see those slowly (probably, it is very precious not to be disturbed..) In the back, I can sit down on the corridor to admire the small garden called “Bansui-En”. This is a circuit style garden (or, stroll garden with a central pond) in the early Edo period. “Ban” means night, “Sui” means green, and “En” means a garden. Since the darkness between branches give the impression of seeing greenery at night, the garden is called Bansui-En. Of course, I enjoyed the famous painting of a carp, Maruyama Okyo , a famoust painter in the 18th century. When I looked at the painting, the carp seemed moving. After I charted out the buildings, I walked out and stand in front of Chokushi-Mon, the gate only used for the emperors (now, only the head monk can use), and walked down from another stairs where you can admire beautiful trees. For your information, there is a hidden soba noodle shop around 10-mins walk, and you will be able to feel the tremendous beauty of a Japanese mountainous town. Here is away from the city center, but not too far, so if you are interested in to soak in silence and feel solace, it would be a nice place to visit.

This temple was opened by Gyoki, in 703 and was called “Izumoji Temple”, and located in the northern part of Kyoto city. During the war-torn eras, it faced many calamities, and was reconstructed in 1665 in this town of Yamashina. It is a “Monzeki Temple”, a temple where the imperial lineage served as a priest. So, the buildings are of particular values when we see the style of Monzeki Temple style. The principal image is the Bishamon-Ten, and the statue was made by Dengyo-Daishi, who opened the Tendai Sect of Buddhism. Since the Bishamon-Ten is regarded as the god of victory, it is also regarded as the god of business, and the safety of a family.
<High Spots>
When you visit here, I would like to suggest these;
-      To walk up the precipitous stairs to the temple gate and enter the temple between the two “Nio” guardian statues.
-      Press your hands together to wish for your good luck on your business and safety of your family.
-      To enter the inner buildings to see the paintings and its garden.
-      To walk down from another slow stairs, and enjoy feeling each season’s beauty.
-      If you have time, you can walk out from the temple, and go further west, to visit a small temple called “Yamashina Shoten”, and the formal name is Sorinin Temple, the sub-temple of Bishamondo Temple. “Shoten” is one of a guardian deities, and it has a head of elephant, and a body of human. And usually, Shoten has two bodies (like two people), hugging each other. So, it is said to be able to receive the good luck of matrimonial harmony, and being blessed with children. This is like a hidden place, and especially beautiful in autumn.
-      Stop by a soba noodle restaurant, called “Kogetsu”. (By appointed only)
投稿者 Small Japan 時刻: 11:18 PM
ラベル: Bishamondo Temple, KYO: Temples, Kyoto, May
Newer Post Older Post Home