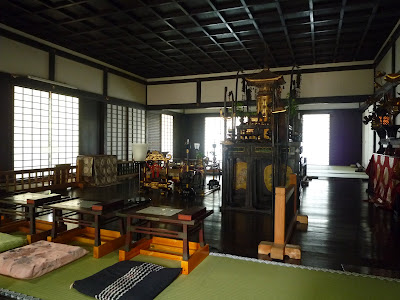 Lingered in the shadow of Sennyuji Temple, the temple was very quiet when I visited in June. One of the most interesting characteristics of the temple was, it was the oldest training hall for “Shakyo”, transcribing sutras. I have never tried “Shakyo” before, but I am so interested in trying. I guess, it is sometimes necessary to be surrounded ourselves with silence, and Shakyo would be a great opportunity to do so. I often slip into meditation, but Shakyo is another great approach. So, when I visited this temple, I thought I would come back again to have time for that.


At the entrance, a lady gave me a brief map with must-see sights in this temple. I followed that map, and launched an expedition.


Reimeiden Hall is the place where spirit tablets of imperial family have been laid to rest. The building itself was built in Meiji period, but the tablets of successive emperors, princes, and princesses from 14th century are there. In the middle, the life-sized (almost) statues of the emperor Gokogon & the emperor Goenyu can be seen. I felt a bit strange to see those statues, because essentially, emperors could not be seen to public. Those cannot be seen clearly, but still, I felt their mind that even they are in a honorable position, they welcome all the people, and that is, one of the greatest things for religious place.


I came in the main building of Ryugeden, where everybody can experience Shakyo. First, I prayed for the Yakushi Nyorai (Buddha who able to cure all ills) and appreciated that I could come at heart. Two Nikko (Sunlight) and Gakko (Moonlight) bodhisattva protected the Yakushi Nyorai. In the center of the room, there was a small tower where sutras have been put. Around the tower, small desks for Shakyo were set. Those desks were dedicated from the emperor Gomizunoo in 17th century and still those have been used for the people who wish to transcribe sutras. Anyhow, if you visit there, please look at the roof of the Ryugeden, which is very unique. It is called “Kokera-buki” style. Wooden plates from trees called Sawara, (Chamaecyparis pisifera) , found only in Japan, are nailed to the roof with bamboo pegs.


After that, I reached a room called “Satori-no Ma”, where the window of enlightenment was. On that day, the window was filled with lively green trees (sorry, but I did not clarify which kind of trees I saw), but it was great to see a scenery which was like “being set in a frame”. According to the temple’s instruction, Kobai (rose plums), Kaido (a tree of the apple family with red blossoms), and Shakunage (Rhododendron) are planted there. This time, on a summer day, the frame gave me an impression like “active”, and probably, every time I visit there and sit down in front of that window, my feeling would be quite different. As a conclusion, this temple may be a good place for meeting myself through Shakyo & the window.


Incidentally, I love suspense dramas. One of the famous authors, Misa Yamamura’s grave is on a mountain just behind this temple. Her works always focused on Kyoto and its culture, and still, her dramas are played and can be seen on TV. I have never known that she was buried there. It was such a fortuity for me, so I paid respect to her grave.


<Overview>
It is a branch temple of Sennyuji Temple. It was constructed in 1372, by Chikugan Shokou under the order from the emperor Gokogon. And his son, the emperor Goenyu opened the Ryugeden Hall for Shakyo, transcribing sutras. After those two emperors, the emperor Shoko, and the emperor Komatsu also adored this temple. Those emperors were all from Hokucho (the northern Imperial court – In around 1333-1392, from the end of Kamakura period to the beginning of Muromachi period, there was a period called “Nanbokucho”, which means there are two Imperial courts in the north and the south. It means, there were two emperors at the same time, and it was a turbulent time.). From that period, the temple has been linked by fate to the Imperial family. The temple was burned down in 1470 and rebuilt later on in the Edo and the Meiji period. 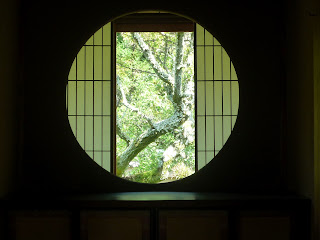 When you visit here, I would like to suggest these;
-      To experience Shakyo whenever you feel like to do so
-      To visit the temple on weekdays (probably it would be quieter), and sit in front of the window of enlightenment
-      To ask for a Maccha tea at the entrance (JPY500). It would be nice to have a cup of tea, seeing Japanese gardens
-      To check the Daikokuten statue in their kitchen. It is indeed enshrined in the kitchen, and his face is very unique. People believe that the Daikokuten bring happiness to their home. Daikokuten is one of the Seven Deities of Good Fortune, and there are them in one of the Sennyuji (branch) temples. It would be interesting to meet all of them.
投稿者 Small Japan 時刻: 1:33 AM
ラベル: June, KYO: Temples, Kyoto, Unryuin Temple
Newer Post Older Post Home