I took a JR train from Kyoto station to Tofukuji station. From there, I walked to Tofukuji temple. It was a beautiful day in May, and I enjoyed walking under beautiful greenery of maple trees to the north gate of the temple. I passed some sub-temples, and reached the Gaunkyo Bridge, one of the three most beautiful bridges in this temple. From this bridge, it is beautiful to see the Tutenkyo Bridge in the middle, which is the most famous one. I walked further to the Kusakamon Gate. I was headed to the Tutenkyo Bridge & Kaisando Hall. There were few people visiting this temple on that day. It was so lucky that I got the beautiful scenery of green maple leaves all to myself. Indeed, I felt that when I would like to visit somewhere in silence, it should be at least in weekdays, not in weekends. I walked up to Kaisando Hall, where the priest who first started this temple is honored. In front of that, there is an oblong garden, constructed in the middle of the Edo period. Then, I walked down to the large garden of this temple, and fully admired the beautiful green maples. Usually, Japanese enjoy viewing colored leaves in Autumn, but I love to view such greenery, which give us fresh but chilled atmosphere. It was nice to see those from the Tutenkyo Bridge, but I preferred to look up the Tutenkyo Bridge from the bottom of this garden.
After that, I entered Hojo, the abbot’s chamber. Here, there are famous Zen gardens, and I enjoyed it (again in silence). There are eight kinds of gardens, which reflect the eight important incidents happened in the Buddha’s life. Those gardens are located in the north, south, east and west of this building. There are many Zen temples who have great gardens, but this is the only temple which have gardens that are set out in 4 directions around the main building. So, for garden-lovers, it would be an interesting place to visit. 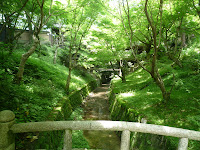 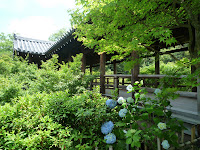 The southern garden is composed of four giant rocks symbolizing the four Elysian islands: “Horai”, “Hojo”, “Eiju”, and “Kyoryo”, on a bed of swirling raked-gravels that symbolizes “Hakkai”, (the 8 rough sea). The Western garden is a juxtaposition of squarely trimmed azalea shrubs planned against square fields of white gravels to reflect its name “Seiden ichimatsu”, an ancient Chinese way of land division in the manner of the Chinese character “sei”. The Northern garden may be the most famous ones for tourists, since the famous artist, Isamu Noguchi said this garden like a Mondoriaan style, cutting edge garden. The Northern garden uses foundation rocks from the front gate and moss to manifest an irregular checkered field of green. It ingeniously embodies the colorful autumn foliage of the Sengyokukan ravine for a scenic background. The Eastern garden, named “Hokuto No Niwa”, distributes the temple’s foundation pillars amidst a bed of gravels to illustrate Hokutoshichisei, the Great Bear constellation. Since there were few people there, I made the circuit of Hojo twice. First, I viewed normally, taking pictures and so on. Second, I took more time. I sat down where I wanted, and imagined the world that the garden reflected. After Hojo, I walked to the bathroom where monks used to use. It was a steamed bath, for more than 100 monks. So, to save water & firewood, the style was a steamed bath, not using plenty of those. It is a beautiful spirit of Ecology, to protect nature. I could see the beautiful aspects of religion here.

I walked in front of the Sanmon Gate, the main gate and walked in front of the main hall, where I could see the huge painting of dragons by Domoto Insho. Usually, when I visit temples or shrines, I respect the main gate, but I made a mistake this time. However, this temple can be said one of the most interesting Zen temples to visit. It takes around 1 to 1.5 hours, and if you are fine, it would be also interesting to stop by at some sub-temples. 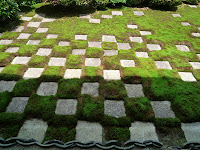 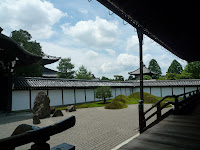 <Overview>
This temple is one of the five “Kyoto Gozan” temples. It is a famous Zen temple. It was constructed in Kamakura period by a great statesman, Kujo Michiie. The name “Tofukuji” was taken from the two major temples in Nara. Todaiji, and Kofukuji temple. In the Buddha’s hall, there is a 15-meter tall standing Buddha statue, erected to indicate that the temple was Kyoto’s “new Buddhist temple”. Ennibenen in the 13th century was the priest who started this temple and he was given the title of “Shoichi Kokushi”. He was the first priest to receive the title of “Kokushi (national priest)” from an emperor of Japan. This temple has maintained its Zen architecture since the Middle Ages, and as the main Rinzai sect temple, can boast a magnificent Doto Garan Complex, the only one of its kind in Kyoto. Since it was established in 750 ago, it has served as a Zen temple that provides visitors with the opportunity to see the essence of Zen. This is most visible through the wealth of medieval Zen artifacts seen throughout the premises.

<High Spots>
When you visit here, I would like to suggest these;
-      To walk around the area from stem to stern to admire the greenery.
-      To admire the wonderful gardens around Hojo Hall.
-      To see the oldest bathroom for monks in Kyoto