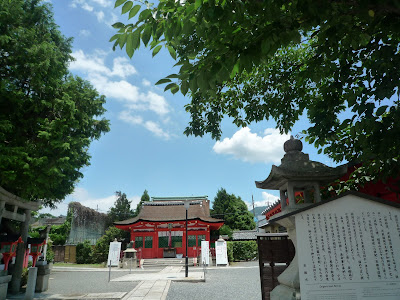 When I was checking shrines & temples in Yamashina ward (where I was born), I found a shrine which is for all working women. I have worked for more than 10 years, and now I am challenging to a new goal in the travel industry. I had no idea for this shrine even though I had lived in this town for 30 years. I felt it was linked by a kind of fate to have found out this in this year. The shrine is located in the southern area of Yamashina ward, and cannot be said it is easy to access, but many famous people come here incognito. I firstly prayed for the god of Origamiinari, to have appreciated that I could decide to challenge a new life. I intoned that I would forge ahead. Other than the main building, there are three other points. One is called Sankuroinari Jinja Shrine. “San” means three, and “Kuro” means difficulty. As the name of the shrine says, this god of Inari drives away three kinds of difficulties when human lives. Three difficulties are human relationship, money, and health. So, I understand that we can make efforts, and it would bring us happiness after all. I was encouraged after visiting this shrine. Another one was Inari Zuka tumulus. I climbed stairs on the left hand side, and I was awe-struck at the atmosphere. This place is said to be the place where the god of Inari came down on this earth in the 6th century secondly. By the wayside, there is a stone shaped like a human brain, and it is said to bring us creative ability if we stroke it. It is a part of a tree, but indeed, it looks like a human brain. (Actually, I saw one more brain-shaped tree near that…) Finally, I saw a very small shrine, called “Takara Daijin”, which enshrines the god of betting, but I thought I did not need the help, so I passed on.

<Overview>
This shrine is known for Yamashinainari, or Fushimiinari Okunomiya (inner shrine of Fushimiinari). The great god of Inari, Ugano Mitamano Kami is enshrined. According to the history of this shrine, the god of Fushimiinari first descended to earth on the Sanga-mine Peak of Mt.Inari, and after that, the god came down on this Inari Zuka tumulus. It remains the ancient style of our country’s folk beliefs. In the end of Edo period, the emperor Komei prayed for the healing of maids of honor, including Nagahashi-no Tsubone at the time of a ceremony, and offered “Chomei Bashi”, means chopsticks to invoke a long life). After that, this shrine is believed to protect working women.

<High Spots>
When you visit here, I would like to suggest these;
-      To make a wish for your business success especially for women.
-      To climbed up stairs to pray for the tumulus where the god of Inari came down.
-      To visit Sankuroinari Jinja Shrine, for looking back your efforts, and pray that those will be paid back in the future.
-      To pray for the Takara Daijin to wish your good luck on your betting.
投稿者 Small Japan 時刻: 3:57 PM
ラベル: June, KYO: Shrines, Kyoto, Origamiinari Jinja Shrine
Newer Post Older Post Home