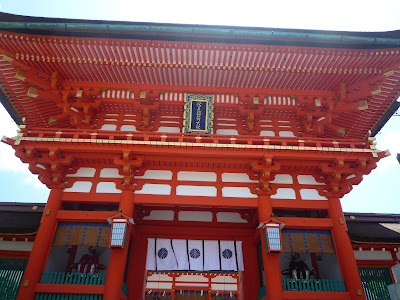 Probably, this is one of the most famous shrines in Kyoto for foreigners. The “Senbon Torii”, which means 1,000 Torii gates (actually, there are more than 10,000), makes this shrine very famous. A “Torii” is the border between the mundaneness and the sacred area. People may imagine the mysterious lined Torii tunnel leads to the sacred area of the God, and indeed, it is a mystic place and we can find thousands of photos of those. Actually, people tend to visit there because of those photos. It gives us a strong impression. By the way, the reason why the torii gates are bright red is that the color has vitality, and it expresses the power of the Inari god.


For Japanese, it is the shrine where the god of business prosperity is enshrined. The god of Inari, is one of the popular gods in Japan, and many Inari shrines are spread all over Japan. The Fushimi Inari Taisha Shrine is the head shrine of all (more than 40,000) the Inari shrines. So, people who wish for the business success often visit there.


I have never been to this shrine, but this year, I thought I had to visit. I just wanted to see how I would feel for the torii gates which are so famous. However, when I visit there, it was more likely to “investigate”, rather than thank to the god or pray. But anyway, I started from the main building but a part of the main building was renovated, so I still could not feel anything there. After I prayed, I climbed the steps, and stood in front of the Senbon Torii. It was unique, and probably impressive, but not very much mysterious that I expected. However, the tunnel was split in two lines in the middle of the way to the top. Both seemed to be the same, but when I came to the fork in the trail, I felt like I was in the middle of sacred & mysterious area. I had to choose one, and I felt something about it. To choose something is sometimes very difficult. If those are very different, it may be easy, but if it is very similar or the same, to judge would be quite hard. However, in our lives, there are so many choices and we all the time choose something. For many of the time, there are no correct answers. The important thing is if the choice is right and fair, in my opinion. During walking, I was thinking like that. 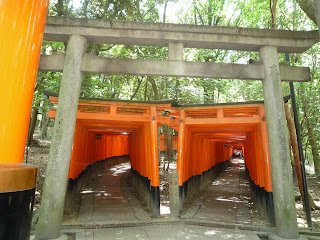 After the tunnel, I reached the Okuno-In, the sub-shrine of this grand shrine. There were interesting stones, called “Omokaru Ishi”. It is a pair of stone lanterns, and first, we pray something (For example, it is the family happiness, or healthy life, anything would be fine.) Then, we try to lift the head of the lanterns. Then, if the person feels the stone is lighter than imagined, the wish will come true. On the other hand, if the person feels it heavy, unfortunately, the wish will not come true. I tried, but I could not even lift it… What did it mean?
With a new attitude, I moved forward. There was another impressive place for me. The name of the shrine was “Kumatakasha Shrine” and the Kodamaike Pond (Shin-Ike pond). “Kodama” means an echo. The pond has a legend. When we look for a long-lost person, we crap for the pond, and if we hear the echo, there should be a clue to the direction where the echo came from. Next to the pond, there was a Kumatakasha Shrine. It was just a small roadside shrine, but the darkness of the shrine, made me feel a bit scared.


(By the way, on the way, I reached a very silent area, with many bamboos. I sat down, and stayed there for a while. The wind created the sound, and it was a relaxing time for me. I wished this Inariyama mountain would not lose this silence even many visitors come to visit the shrine. Fushimi Inari Taisha does not mean only for the buildings in front, but the entire mountain. ) 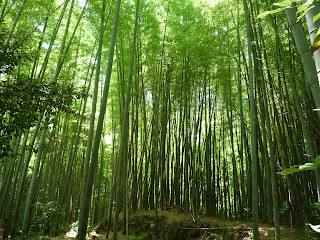 I climbed the stairs, and finished at around Mitsutsuji area. Not only the Senbon Torii, but there were tremendous small and large torii gates were dedicated. When I went down the mountain, I also saw a lot of shrines dedicated by famous companies. It was indeed the head of Inari faith.

This time, I could not go up to the top, but it was an interesting hiking experience. Next time, when I have time, I would like to try again. One reason is, the course was not too hard, and another reason is because there are thousands of torii gates, the entire mountain was like a huge sacred area. So, I thought that it would be a great place for being sunk in thought, especially when I have to judge something. It would be a great chance to ask the voice to my own heart, surrounded by the god of Inari.


<Overview>
It is unclear when this shrine was constructed. One theory is in 711, so, the shrine celebrated 1300 years anniversary in 2011. But anyhow, it is said that the shrine started from 708-715. There was a local ruling family called “Hata Family”, and one literature said that the chief of the Hata family, named “Hatano Irogu” shot an arrow to a rice cake (Mochi), the rice cake became a white bird, and the bird flied and landed on the peak of the Inari Mountain. From that place, rice came out and brought the people happiness. So, the Hata family constructed a shrine for that sacred place. Foxes are the messengers of the god, so the shrines where the god of Inari are enshrined are protected by foxes.

<High Spots>
When you visit here, I would like to suggest these;
-      To go forward after the Senbon Torii for enjoying walking
-      To visit to pray for your business prosperity (if you wish), because the shrine is the most famous one for such wishes
-      To see the strength of people’s believes, it is nice to visit there in the New year’s day (Around 250,000 people visit during the New Year’s days)
投稿者 Small Japan 時刻: 9:00 PM
ラベル: Fushimi Inari Taisha Shrine, June, KYO: Shrines, Kyoto
Newer Post Older Post Home